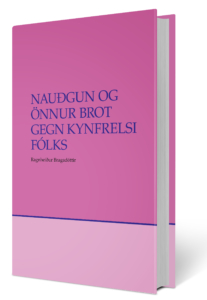 Bókaútgáfan Codex (Codex Publisher) has published the book Rape and other violations of people’s sexual freedom (i. Nauðgun og önnur brot gegn kynfrelsi fólks) by Ragnheiður Bragadóttir, Professor of Law at the Faculty of Law, University of Iceland. The book is the result of a comprehensive study by the author on the legislation on sexual offences under the title: Sexual offences – Legislation and Case Law, and some of the results of the study appear in this new book.

The book Rape and other violations of people’s sexual freedom contains the most comprehensive study of these offences that has been published in Iceland on the subject, i.e. the criminal conduct and sentencing, and it includes comparisons with Nordic law. The book is divided into six parts. The first part deals with various common points pertaining to rape and other offences against people’s sexual freedom. It also explains the historical development of legal provisions on rape, from the laws that were in place during the Icelandic Commonwealth (930–1262) and up to our time, when the concept of consent was included in the provision on rape. The next four parts of the book deal with different types of offences, i.e. rape that consists of having intercourse or other sexual interaction with a person without her/his consent, rape that involves the abuse of a person in a vulnerable position, sexual exploitation and sexual harassment. Many judgements from the courts are discussed to explain the subject and the book contains a comprehensive study of the Supreme Court´s decisions in rape cases and cases on sexual harassment. The final part of the book consists of contemplations on a few amendments made to the law in recent years, whether or not they have provided the victims a better legal protection and whether further amendments are needed. The subject is presented in a social context and seen from a critical point of view.

The book is 472 pages and intended for researchers and university teaching, both in law and other social sciences. It is essential for lawyers and everyone who deals with sexual offences in their profession. It is also accessible for those interested in this important field of law and involves a contribution to the discussion on sexual offences in society.

Ragnheiður Bragadóttir graduated as a Candidate of Law from the University of Iceland in 1982 and also studied criminal law and criminology at the University of Copenhagen. She has taught and done research at the Faculty of Law University of Iceland since 1984 and became a Professor of Law the 1st of January 2000, the first woman in Iceland to obtain that title. Ragnheiður is a very active participant in Nordic and international research collaborations and has led international research projects and done research at universities in the Nordic countries, Germany, England, and the United States. She was a representative of Iceland in the Scandinavian Research Council for Criminology 1998-2012, its vice president 2007-2009, and its president 2010-2012. Ragnheiður has a long and prolific writing career and has published books, as well as dozens of chapters and academic articles, both in Iceland and abroad.